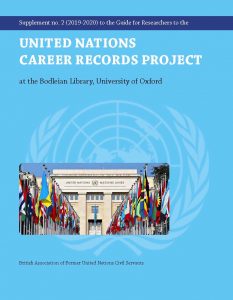 The second biennial Supplement to the Guide for Researchers to the UN Career Records Project has now been uploaded to the BAFUNCS website.  Covering the years 2019 and 2020, it represents contributions of material from 18 former and 23 new contributors.

Several BAFUNCS members have made important additional contributions.  Marilyn Carr has provided an interesting study entitled ‘Women, the League of Nations and the United Nations: a Story in Three Parts’.  Among several items, Christine Oppong has made available a significant paper presented to the Vatican’s Pontifical Academy on ‘Population Change – the Statuses and Roles of Women’.  Margo Picken‘s material includes salient documents such as ‘Denial in Cambodia’, ‘The Betrayed People’ (of East Timor), and a 1988 ‘Review of the UN Advisory and Technical Assistance program for Human Rights’.  Coby Sikkens has presented the letters which she sent to her friends at Christmas from 1992 to 2006 – very readable sidelights on her career with WHO. Michael Askwith, now stepping down from leading the UNCRP, has donated the entire archive of his field and HQ assignments and consultancies, an invaluable record of a highly experienced Resident Representative and Resident Coordinator.

In this Supplement, however, the catchment also goes beyond BAFUNCS.  Nay Htun of Myanmar and UNEP remembers the legendary Maurice Strong.  UNDP’s Patrice-Ariel Français has provided an English translation of his 380-page book, Memorias de Cuba (in Fidel Castro’s time).  Pierre Landell-Mills offers a trenchant analysis of the World Bank’s past failures to confront poor governance in borrower countries.

And there is even humour: Colonel (ret’d) Dickie Winchester’s account of his time with UNTAET in East Timor is at moments hilarious; and our own Duncan Barclay takes a wry look at the foibles of the UN system in his book of cartoons – Saving the World – the Hard Way.

These several hundred items are now conserved for posterity in the Bodleian Library.  And it’s encouraging to report that there is already the promise of enough material for a third Supplement, in 2023. But there is ample room for further contributions – so please dig out those old reports, or commit your memoirs to paper while you can still call them to mind!

And one other thought.  To enable the material to be catalogued – even eventually digitised and thus available generally online – the UNCRP needs a fairy godmother or godfather. to wave the same kind of magic financial wand that so strengthened the BAFUNCS Benevolent Fund.  If it could be your Will, there’s certainly a way! How more gratefully could you be remembered? 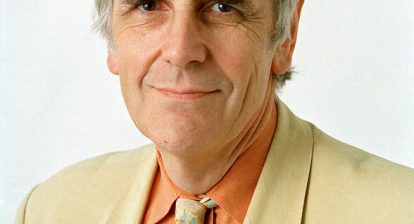 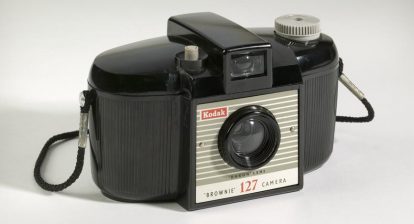 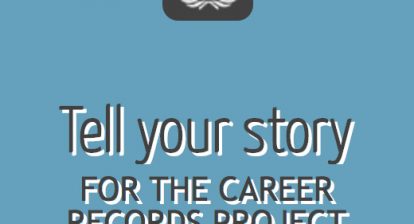